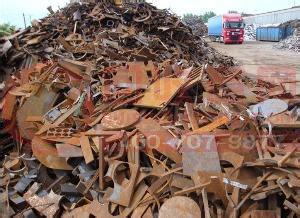 Scrap is waste steel that is recycled or damaged in production and living projects; its carbon content is generally less than 2.0%, and sulfur and phosphorus content are not more than 0.05%. Generally speaking, scrap steel can be divided into four categories according to its source: returning scrap (self-produced scrap), processing scrap, depreciable scrap, and imported scrap.

1. "Returned scrap steel" in steel mills, also known as "self-produced scrap steel", which is produced in the production process of steel making, steel rolling and finishing, in the form of various cut ends and waste products. This kind of scrap steel is not mixed with other elements, and its shape is relatively regular, and it can be loaded into the steelmaking furnace almost immediately. Its processing preparation workload is generally small and can be disposed of in the steel mill as it is produced. This kind of scrap accounts for different proportions of total scrap, which is generally 30-50%. However, with the continuous advancement of process technologies such as continuous casting, continuous rolling, and endless rolling, and the acceleration of industrialization, the metal yield and the rate of steel rolling have been continuously improved, resulting in a continuous decline in the amount of self-produced scrap.

2. The "processed scrap" produced in the manufacturing industry of steel products is mostly punched scraps, scraps, and material. For example, the steel utilization rate of ball bearing steel is generally only about 50%, and about half of the steel is scrap steel in manufacturing. In addition to the scraps, the processed scrap is generally not mixed with other elements, so it can be sent to the steel mill for quick packing and briquetting. This scrap accounts for about 20-25% of the total scrap. However, with the advancement of near-end manufacturing technology of steel products, the improvement of surface quality, the reduction of dimensional tolerances and the technological advancement of the machining industry, the proportion of such scrap will gradually decrease.

3. The waste materials obtained from various scrapped equipment, automobiles, ships, and building structures are called â€œdepreciated scrap steelâ€. This scrap accounts for about 20-25% of the total scrap. With the advancement of social development and the increase in accumulation, the proportion of such scrap will continue to increase. Depreciable scrap often takes several years or even decades to be returned to the mill. It is the least clean scrap, not only mixed with many other elements and non-metallic impurities, but also in various shapes and sizes. Extremely irregular, making processing more difficult. At the same time, scrap steel recovered from municipal waste, mainly light and thin materials such as nozzles and iron drums, is also classified as "depreciated scrap steel".

At present, the development of scrap processing technology and equipment is mostly aimed at "depreciation of scrap steel".